skip to main | skip to sidebar

For more images, teaching and roadshow schedule, please visit my website at www.kellyangeleybeadologie.com.

As an artist myself, I'm curious about what it is that inpires fellow artists. What is it that inpires you? Music is a BIG inspiration for me. I had my first guitar lesson today from a man who is a huge inspiration to me. Okay, well to be honest I've actually had three previous lessons from three different people during the course of the past 10 years. So, technically it wasn't my first lesson. However, I learned so much today that it might as well have been my very first lesson.
Part of the problem may have been that I wasn't in the right head space to learn. In one instance it was definatinatly poor instruction and a bad circumstance. But in order to protect the names of the innocent or in one case, not-so innocent, they shall remain nameless and I shall leave the circumstances to your vivid imaginations. I will only add the minor detail that the instuctor quickly drew the blinds and curtains around the house as soon as I entered and made a comment about wanting to teach me of things non-guitar related. I couldn't get out of the place fast enough, let me tell you. The second lesson involved San Fransisco rush hour traffic and an auto accident on the way home. A series of unfortunate events...
Today the guitar gods were with me. I had a lesson from guitar guru Byron Case, who recently inspired me to pick up my guitar again. I've been practicing every single day since I saw him play just over two weeks ago. Not only is the man a phenomenal guitar player but he has he patience of a glacier, a saint- truly. I put his patience to the test today so I know this for a fact. I learned that everything I thought I knew, I didn't really know.  I've been playing along with my cd's, strumming chords I've taught myself, thinking I was really making progresss- cool as a cucumber, when really I don't know my elbow from my g-string. Suffice it to say, I learned I have a lot to learn.
But... an important connection was made. I found someone I think I can really learn from. Someone, who has some of the same heros I do, and is familiar with what I want to learn. Not only familiar with, but proficient in.  A big thank you goes out to the guitar gods. I think this is just what the doctor ordered.
Here's a picture of my guitar. Nadine is her name.
http://www2.gibson.com/Products/Electric-Guitars/ES/Epiphone/Dot.aspx
Posted by beadologist at 10:27 PM No comments: Links to this post

These days it seems I'm adding items to my "to-do list" faster than I can check them off. I did manage to cross off one important item this afternoon. I got my Bead Dreams Competetion submission completed and it feels good to have that done.
To the left is a sneak peek photo of my bead embroidered collar entitled "Dance of Time." The cabochon in the bottom center is a fossilized mudcrack from Morocco, which was cut by rock star Gary Wilson. The top center cab is a Ganesha image which is the Hindu elephant god one is supposed to call on to help remove obsticles. I think we could all use a little Ganesha power in our lives at times. The piece also contains a lampwork glass bead by Rashan Omari Jones, fossil ammonites, freshwater pearls, vintage jet and marcasite nailheads, pressed-glass beads, brass, precious metal seed beads, charlottes, three-cuts, vintage glass cabs and Ultrasuede. This little collar took just over a year to complete and I'm quite smitten by it, if I do says so myself! This will be a 'keeper'.
Posted by beadologist at 5:52 PM 3 comments: Links to this post

Time is flying by these days and I feel like I can't keep up. I have so many kits to make that I'm up to my knees is seed beads. I think I'm finally finished making extra kits for my "Happy Go Lucky" embroidered cuff featured in the April/May issue of Beadwork Magazine. Kits are listed in my Etsy shop and are selling quick! Here's a link:http://www.etsy.com/view_listing.php?listing_id=42954065

Here's a photo of the piece courtesy of Interweave Press.

Now, I really must get to work and make some other kits. I'm leaving for Bead and Button at the end of May and the show will be here before I know it. I'm also teaching five classes at the Puget Sound Bead Festival this year, which means, you guessed it, more kits to make!
Posted by beadologist at 11:59 AM No comments: Links to this post

I Got Blisters On My Fingers!

This time change has got me all screwed up. I'm staying up even later than I usually do at night and sleeping later in the morning. As a result, I seem to be getting less accomplished and my to-do list is growing exponentially.
I have, however, been making an effort to make time to do things that are good for me, which I have been neglecting for far too long. I've been going for long walks every day. Even when it's cold, windy or gloomy- I force myself and I always feel so much better afterward. An added bonus is that I lost 6lbs over the past two weeks. Yay me.
One more thing that I have done to promote My self-wellbeing is pick up my guitar again. I practiced for two hours today and I'm proud to report... I got blisters on my fingers! Geez, if I'd only keep up with my practice, I wouldn't have to keep going through the whole blister/callus/blister/callus process over and over again. Doh!
It's time to get back to the ever-growing list of things to do. I have five million and one kits to make and for some reasons the kit making faeries haven't shown up yet.
Posted by beadologist at 5:07 PM 1 comment: Links to this post

Bringing It All Back Home

I had all good intentions to work on making kits for my classes last night and maybe even getting a bit of beadwork in until the wee hours of the morning. But... after soaking in the hot tub for a long spell, I felt like molten jello and got nothing accomplished. It's so nice to be outside and enjoy the night at this time of year. I turned the lights and the jets off so that I could do some star gazing and listen to the silence. Unfortunately, the clouds are rolling in and there wasn't a star to be seen but the sounds of "silence" made up for it. Just down the hill from my house is Siltcoos Lake, where the cacophony of frogs was especially loud this evening. From the deck I can also hear the creek that runs alongside the bottom of the hill, just at the end of the driveway. Behind the house, about a mile away is the ocean. I'm lucky enough to be able to hear that, too.
The hot tub is my "think tank." Last night I was thinking about all of the things in life that we take for granted. For example, the frogs. Listening to the frogs is one of my favorite things about living here and yet, I don't always make the time to pay attention to them. 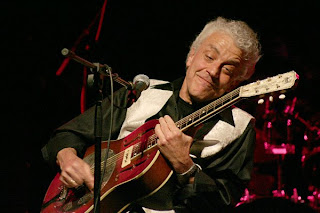 When I lived in Long Beach, CA I took the music scene for granted. I could pick any night of the week to go out and see quality live music and it was all only a short drive away (ok well, maybe a little longer than short with traffic but still...). I used to spend a lot of time just down the street from my apartment, at the Blue Cafe. I would go there and listen to fine musicians such as Doug MacLeod www.doug-macleod.com/ (pictured above) every Thurs. night at happy hour. Doug is an incredible blues musician and was one of the reasons I ever picked up a guitar in the first place. He's played with some of the finest blues musicians in the world and even played with one of my other favorite guitar players, the late great Pee Wee Crayton. Yes, indeed folks, I was SPOILED.
Check it out: http://www.youtube.com/watch?v=pCEfaeH0Iik 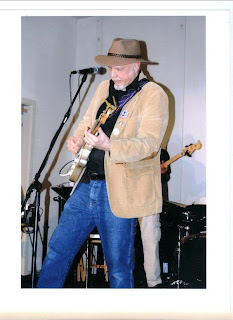 Ever since I moved here to Florence, OR I have been missing that music scene. Luckily, every Sunday night there is phenomenal group of musicians that gets together at the Traveler's Cove. The line-up includes regulars such as my friend Peter Giri (pictured left) on guitar and bass, Paul Biondi on sax, Suzanne Sheretta on sax, Nate Kaplan on drums and Mike Anderson on guitar and bass. These folks sure can play and once again I'm feeling a bit spoiled. 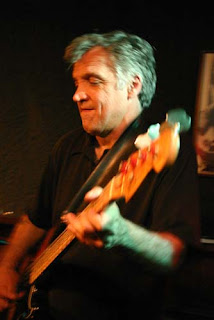 5449336407026887714" />
This past Saturday night, I was especially spoiled, as we had a bonus night of music down at the Cove. Not only were we blessed with Peter Giri and Nate Kaplan but they brought along uber-talented harpsmen Lloyd Tolbert and guitar guru Byron Case (pictued left). Man, oh man, that Byron can play. We were treated to a long and fabulous first set of blues. Blues the way blues was meant to be played. It was exactly what I've been missing. It felt like going home. Three days later I'm still feeling good from that quality dose of music. It doesn't get much better than that!
Posted by beadologist at 11:30 PM 1 comment: Links to this post

Ahhh... the buzz of spring is in the air. I can feel it! I just went for an invigorating walk in my beautiful, woodsy neighborhood. The sweet smell of jasmine, honeysuckle and blooms a'bloomin was most intoxicatingly heavenly. I saw numerous bumble bees and along the way I came across two different families of deer. I'm happy to report that the deer are looking rather healthy this year. It must be all of the tulips they've been munching on in my neighbor's garden.
While walking, listening to Willie Dixon on my ipod (which by the way, is fantastic walking music that makes you want to strut your stuff), I stumbled upon some skeletal remains along the side of the road. I'm not sure if it was a nutria or an oppossum because the skull was missing. I've decided I'm going to go back tomorrow and collect some of the vertebrae to use in a beading project. I'm taking Laura McCabe's (http://justletmebead.com) Master Class at Bead & Button this year and the focus is on using unusual materials in your beadwork. So, my eyes are especially open to seeking out unconventional objects.
Is it the arrival of spring that has me feeling so good today? It could be. Was it the acupuncture treatment I had today for my allergies? That definitely helped. Was it the impromptu bass guitar lesson I had with my friend Peter Giri http://petekowalke.com/ yesterday? That was certainly a ton of fun. Could it have been a great weekend with two nights in a row of live music with incredible musicians? That must be it. Whatever it is, I ain't complainin'!
Posted by beadologist at 6:14 PM 1 comment: Links to this post